A downloadable game for Windows

Normalin, a self-appointed vigilantae detective, sets out to uncover the shady business practises of HazMat Co: a giant factory chain that produces a vast variety of products. But as she is wandering around their main head quarters, she is discovered by some night shift employees. She would soon find out that they don't take kindly to snoops.

Not knowing how to deal with her, the employees thought of letting management decide in the morning. Thus they have her tied up, using a variety of HazMat Co products, and stashed away in one of the storage rooms.

The spirited detective must now use her witts and abilities to remove her bindings and to escape her perilous predicament. But she must be wary of vigilant (or otherwise) guards, hazardous traps, and the limitations imposed by her own restraints.

It mixes in puzzle solving elements, with some platforming and stealth. Normalin can jump, kick, pickup items and interact with doors. But she is ill-equiped to fight given her current circuimstances: thus if she is detected by one of the guards it's insta game over. Thankfully there are checkpoints at the start of each room.

This game is CANCELED. I won't add anymore content or finish the story sadly.  Though I will fix game breaking or major bugs if anyone reports them. Since this is the case, I cannot in good conscience sell this game. But I do hope you have fun with it regardless.

Let me know what you think down in the comments. Report any bugs that you find. And please leave a review with your honest opinion (even if it is a low rating).

Playing the game is straightforward. Simply download the *.rar file, extract it in a folder, and then run the Unity executable inside (NormalinEscape.exe).

I've included a text file called "Controls.txt" that will explain how to perform various actions. There are also hints inside of the game itself in case you forgo the text file.

Also note that there is no saving feature. For that reason I've included a way of speeding up the game, so that players can get through the slower sections (hogtie especially) much faster. But in some time-critical segments you might need to switch back to normal speed.

Good game, I liked everything, made it to current end point (new password). I even jumped in small vent space in the opposite wall from the third propeller (and found nothing... I thought there was a secret room). Wish it was finished, because everything was good, fun to play, and satisfaction when you free up legs and start run fast.

So far i found 2 bugs:
You can accumulate speed and jump height impulse if pause the game and press corresponding button for long enough.
If got caught after freeing up arm completely (at end point) - tape on mouth will be restored.

Hey Neno, thanks for the feedback. That small vent space, I was actually planning to use as a secret path to hide a collectible, but forgot it there. ^-^'

Honestly, I just found this game now, and I'm saddened to hear that it's just gonna collect dust as is. A fully-3D bondage platformer is something I've wanted for the longest time, and this scratches every last itch. I do have just one teensy little complaint about the game as it stands now, though.

Holy f*ck, please never used inverted camera controls again (or at least give the option to switch between normal and inverted). I had to turn my mouse completely upside-down to play this game even somewhat normally. But on the same token, thank you for having an in-game speed controller so that the pace doesn't seem so dreadfully sluggish, especially during the hogtie parts.

Also, I got stuck on the "knife room" part as well, but I wasn't stuck, per se... the items you pick up have a slight bit of collision to them, so I used the screwdriver I carried over from the prior vent sequence or the key from the next room as a sort of stepping stool to hop up onto the smaller crate and then the larger ones. It took me about a half-hour just to make it up that first step and still be holding my item if I pressed Enter fast enough... and if you can manage to do that, you can slightly cheese the Arachnobot section by opening the grate beforehand; it kinda removed a lot of the tension, but those piercing red eyes will still haunt me. On the other hand, getting caught in the latex baths was fun to watch; alternate costumes for Normalin like a "rubber-slut" variant would be fun to watch bounce around for a bit.

TL;DR: I wish you hadn't stopped developing this. It has a lot of creative mechanics, and turning it into a Metroidvania of sorts by limiting the player's movement and abilities through bondage is by far the most novel concept in a game.

Thanks for the comment Greg! I've been burned at the stake too many times for the inverted camera issue, so I'll try to be mindful of it from now on. ^-^'

I always seem to find "inverted" controls natural for some reason, maybe because of the games I played as a kid.

I'm glad you enjoyed this game for what it was. It's indeed a shame I abandoned it, but I might give it another try sometime in the future. Maybe even inject some more latex/rubber stuff while I'm at it >:)

For the near future you can satiate your 3d bondage platformer craving with this new project I'm working on! As long as you don't mind bunny-girls and clowns that is. [New Project Devlog]

This game was pretty good, the puzzles where easy but fun to do, the trace of the character is just beautiful but one thing that I didn't really liked was the camera, It's really strange, like, you look right but the game make you look left, if you play with a console controller it's all good but in a PC is just strange, but with the time you get used to it.

Also, one thing that I wanted to ask, when you go down to one room that has a knife on top of the crate is the end of the game? because I got stuck in there, I played 1 more hour "offline" and didn't find anything or how to get that knife, because if there's more I think I will need to change somethings in my video...

for the knive you'll need to kick the box under the vents, objects have physics and it'll fall to you

Edit: Not a bug, I didn't do that, didn't think the game would make you do something like that xD

Sorry for the late reply. But better late than never ^-^'

I'm happy you enjoyed it! Normalin's design was ok at the time, but I'm sure I could do better if I gave it another shot with my current skills :D

I always thought that the camera controls felt right, despite the many complaints. Maybe its the fact I always test my games with a controller that I don't realize the mouse/keyboard controls are terrible.

The knife puzzle is a bit bullshit actually if I'm being honest. It makes use of a game mechanic that isn't demonstrated anywhere else and nobody would be able to guess intuitively. So for that one you can blame my failing as a game designer.

idk I just climbed the crates in the area before the ice room and just got stuck in a pitch black room, I cant reset so I have to replay the whole game to explore.

Don't worry there's not much to explore anyways.
If you freed everything except the gag, then you're at the end of the demo.

A fun little game! A shame you won't be finishing it as it had some potential. I like the cute little touches such as how Normalin's face becomes worried looking in time limited areas.

I also like the posters and how they gave hints to how to escape some of the bindings. You clearly put a lot of thought and effort into this.  Also that all of her bindings are different so it makes sense that you need different solutions to escape each of them.

I'm looking forward to hearing more about the upcoming project you mentioned in the update post!

Glad you liked it! 😄
I'll try my best to make that upcoming project a reality.

That's close to where the demo ends so pretty much yes. There isn't any interesting content after that point.

Was about to ask the same, got to the new password area and wasn't sure where to go from there. I could tell that was close to the end though as there were some unfinished assets in that area. 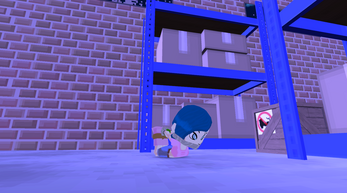 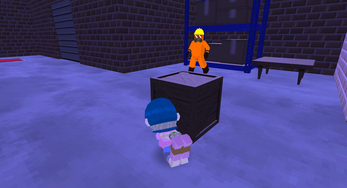 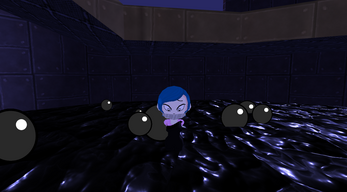 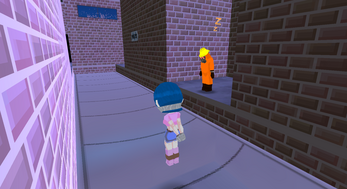